Science behind the Namaskar (Hindu ritual to pray to God)

B. After joining the hands one should bow and bring the head forward.

C. While tilting the headforward, one should place the thumbs at the mid-brow region, i.e. at the point between the eyebrows and try to concentrate on the feet of the Deity.

D. After that, instead of bringing the folded hands down immediately, they should be placed on the mid-chest region for a minute in such way that the wrists touch the chest; then only should the hands be brought down.

A. The fingers should not be stiff while bringing the palms together because this will lead to a decrease in sattva component from the vital and mental sheaths and thus increase the raja component in them. By keeping the fingers relaxed, the subtlest sattva component will get activated. With the strength of this energy, embodied souls are able to fight powerful distressing energies.

B. In the Namaskar posture, the joined fingers act as an antenna to assimilate the Chaitanya (Divine consciousness) or the Energy transmitted by a Deity. While joining the palms, the fingers must touch each other because leaving space between the fingers will result in accumulation of energy in that space. This energy will be immediately transmitted in various directions; therefore the seeker's body will lose the benefit of this potent energy.

D. After joining the palms, bow a little. This posture puts pressure on the navel and activates the five vital energies situated there. Activation of these vital energies in the body makes it sensitive to accepting sattvik frequencies. This later awakens the 'Atma shakti' (i.e. soul energy of an embodied soul). And later, Bhav is awakened. This enables the body to accept in large measures the Chaitanya emitted by the Deity.

E. Touch the thumbs to the mid-brow region. (Please see images above.) This posture awakens the Bhav of surrender in an embodied soul, and in turn activates the appropriate subtle frequencies of Deities from the Universe. They enter through the ’Adnya chakra’ (Sixth of the 7 chakras in the Kundalini) of the embodied soul and settle in the space parallel to it at the back interior of the head. In this space the openings to all the three channels converge; namely, the Moon, the Central and the Sun channels. Due to the movement of these subtler frequencies in this space, the Central Channel is activated. Consequently it facilitates the speedy transmission of these frequencies throughout the body, leading to purification of both the gross and subtle bodies at the same time.

F. After doing Namaskar, to completely imbibe the Chaitanya of the Deity (that has entered the hands by now), instead of bringing the folded hands down immediately, place them on the mid-chest region in such a way that the wrists touch the chest.The 'Anahat chakra' is located at the centre of the chest. Akin to the Adnya chakra, the activity of the Anahat chakra is also to absorb the sattva frequencies. By touching the wrists to the chest, the Anahat chakra is activated and it helps in absorbing more of the sattva component.

When a cloth is wrapped around the neck, it does not activate the Vishuddha chakra (in the throat region) and hence an individual gets less benefit of the sattva component. (More information on this is given in Sanatan's Publication 'Part 3: Vol 29: Bhaktiyoga 4: 'Spiritual Science in the ritualistic worship with sixteen substances'.)
(Ref: Sanatan's Publication - 'The Correct Methods of Paying Obeisance')
Posted by Devharsh Trivedi at 4/26/2012 02:17:00 PM No comments:

As u already know that facebook ceo and founder mark zukerburg stolen the idea of facebook from two twin brother in harvard university in 2001..... later on they complaint and got 65 million dollar in 2007...........

facebook worth 50 billion today but its users getting 0% ....... so this new idea is invoked by the twin

..Click Here To Join..
you must need this referral to join..

Zurker - an Introduction to the Future

In the beginning, nobody questioned the social networks. They were a great way of keeping in touch with friends and making new ones. Eventually, concerns started to mount, and new social network applications started popping up, promising users that they would "own their data."
At Zurker, we've taken things a bit further. You don't just own your data, you own the network. Every Zurker user can very easily become a co-owner (future shareholder) of Zurker.


Zurker is a member-owned application.

Zurker is driven by democracy.

Zurker is owned by you. 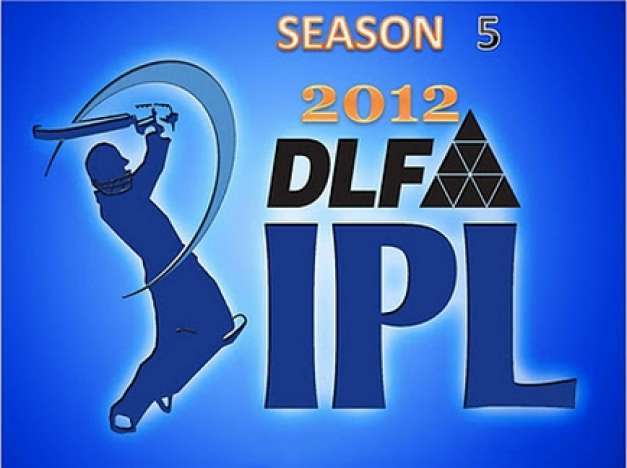 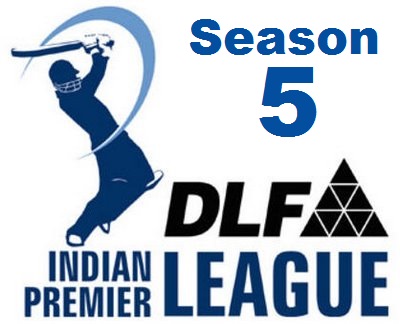 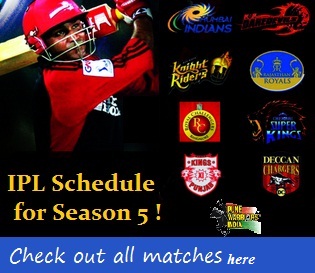 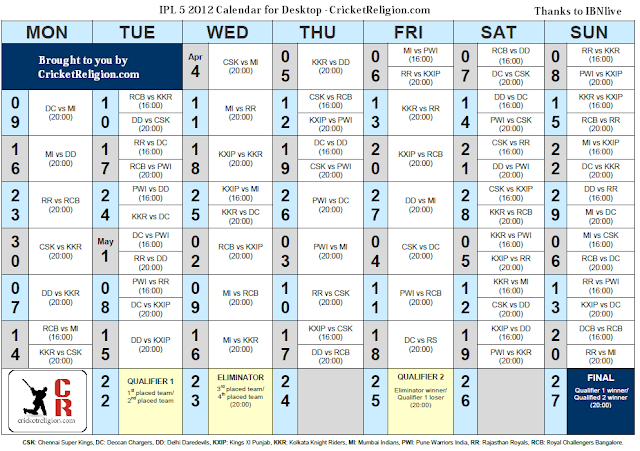 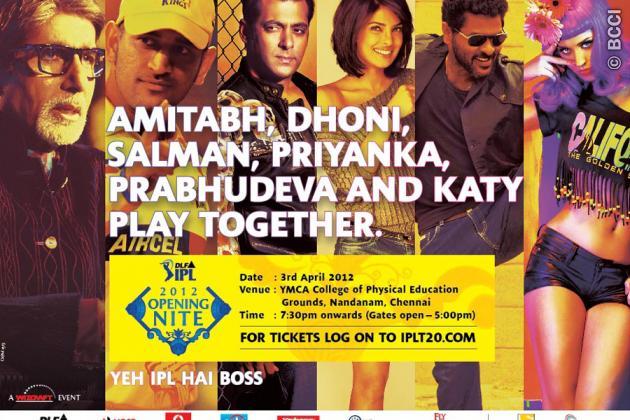 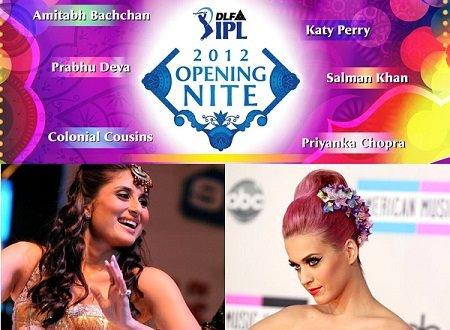 Bollywood and cricket blended seamlessly to make for a glitzy opening ceremony of the fifth edition of the Indian Premier League (IPL) here Tuesday night with a special performance by Hollywood`s India-lover Katy Perry. Tens of thousands of people at the YMCA ground cheered lustily as Amitabh Bachchan, Salman Khan, Prabhudeva, Kareena Kapoor and Priyanka Chopra went through their routines during a pulsating two-hour colorful ceremony. Perry, whose short-lived marriage in India took place two years ago, injected energy into the crowd with her desi chic blingy choli, maang tikka and bindis and her top single ‘Teenage Dream’. 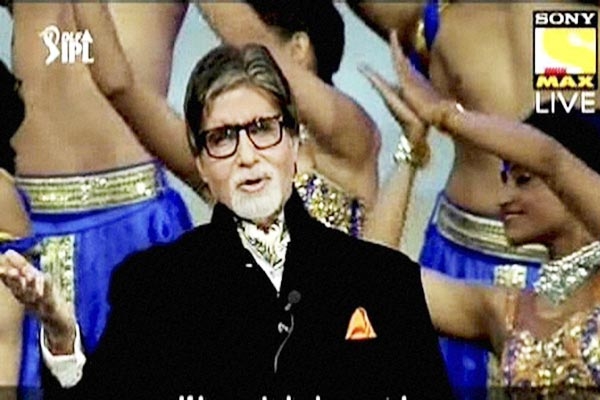 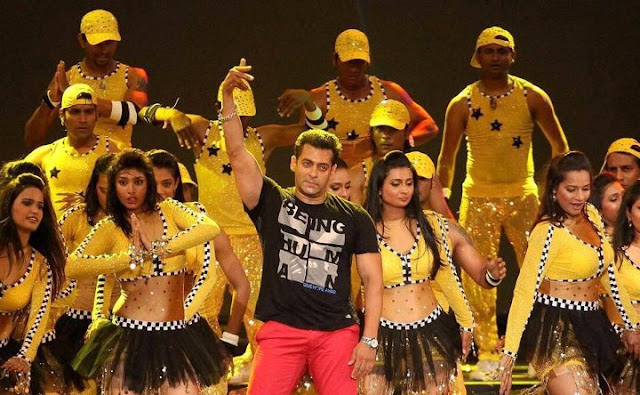 The opening ceremony set the tone for the tournament beginning Wednesday that features nine teams and some of the world`s best cricketers Amitabh, who made his first large-scale public appearance post his abdominal surgeries, set the mood for the show by rendering a poem penned by Prasoon Joshi. His words were aimed to bring the spirit of cricket alive, and Big B`s baritone only added more soul to it. Amitabh looked hale and hearty as he came on stage dressed in velvet coat and trousers, to recite ‘Janam Yadhi Phir Se Mile’. The 69-year-old was accompanied by dancers from the Shiamak Davar troupe, who described the essence of the poem through their performance. 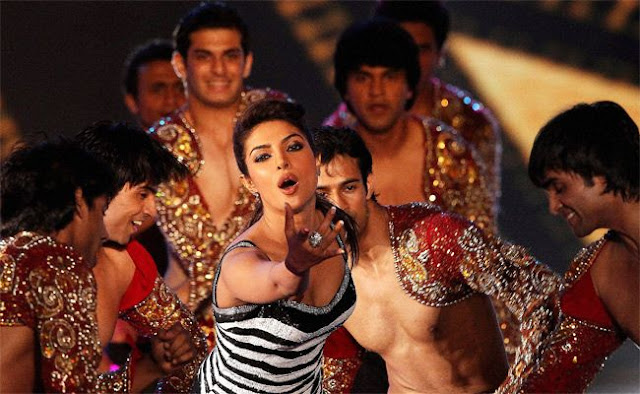 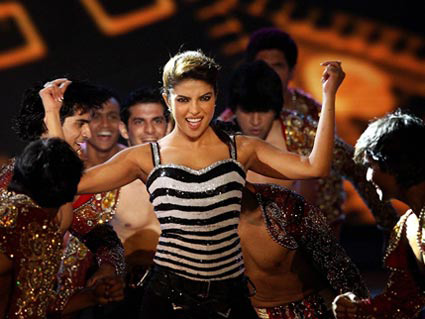 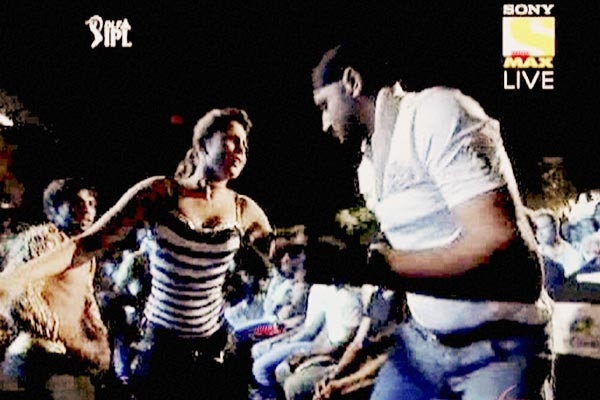 Following this, musical duo Colonial Cousins put together an energetic symphony of sounds with DJ Ravi Drums and South African percussionist group 1st Project. Priyanka put up a mesmerizing performance on her latest hits, and stunned the audience with an aerial act. She set the mood for some dancing as she moved around in the audience, urging cricketers to dance. Priyanka took the packed audience by surprise when she went up in the air during her performance, and got cricketer Harbhajan Singh to dance a little jig with her. 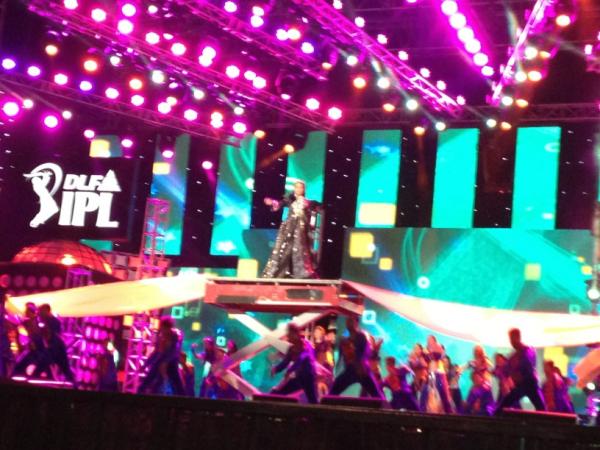 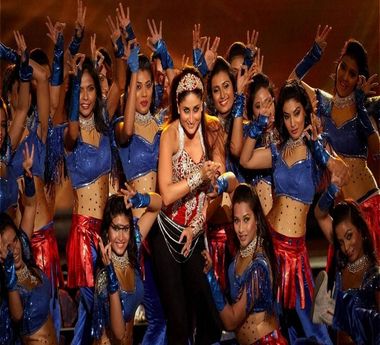 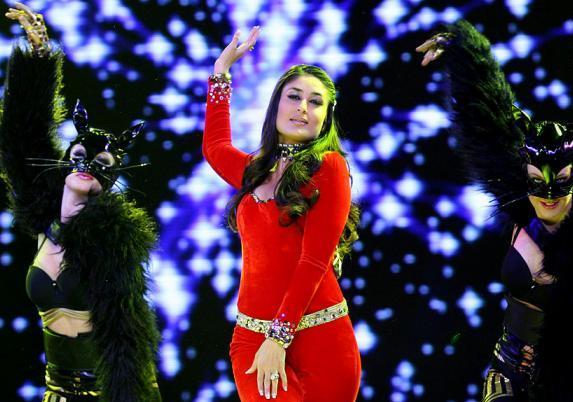 Looking chic in a black and white sequinned top, black pants and a red wrap-around skirt, the actress opened her act with her popular song ‘Aaj ki raat’. She did away with her skirt for a sporty look as she was pulled up in the air with a harness for an aerial act on the ‘Don’ tune. The 29-year-old mesmerised the audience with her confidence, and landed on the stage for a power-packed dance on the number ‘Dhantanaa’ from the film ‘Kaminey’. Later, Priyanka took to the stage again to interact with the cricketers of title holders Chennai Super Kings, who are led by India captain Mahendra Singh Dhoni. She pulled Dhoni`s leg, and asked the boys to join her for a dance on hit Tamil song ‘Nakka mukka’. 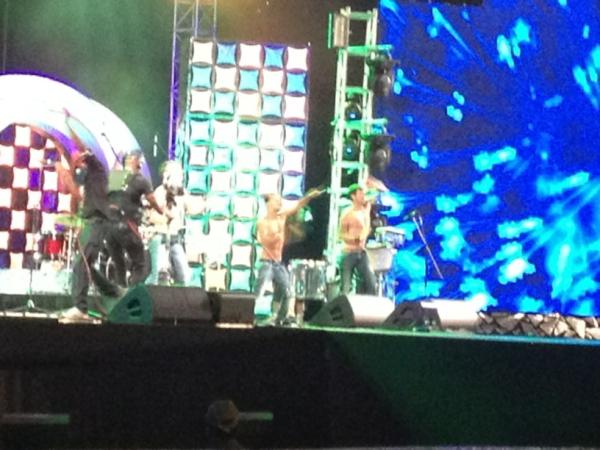 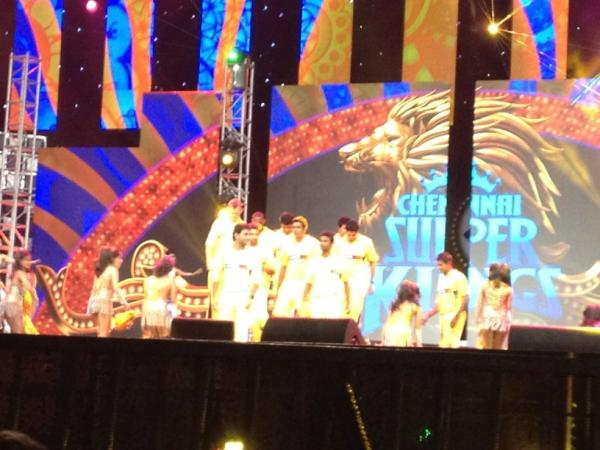 Kareena was another star performer. Be it ‘Chhammak chhallo’ or ‘Dil mera muft ka’, she stole the hearts of the audience away with her perfect moves and lively performance. Not to miss her blingy outfits, which made her stand out. The packed audience cheered in unison for the 31-year-old as she came on stage dressed in a blingy black overcoat. ‘Kaun hai jisne mujhe mudke nahin dekha’ from her popular movie ‘Kabhi Khushi Kabhie Gham’, played in the background as Kareena appeared on stage. And going by her flashy outfit, the dialogue suited the moment perfectly. Even if one wanted, one couldn`t miss her presence on stage. Prabhudeva, known as Indian Michael Jackson, enthralled the audience with his scintillating, effortless and flexible moves. The audience`s enthusiasm went up to the next level as the Tamil superstar performed his signature moves to songs like ‘Main aisa kyun hun’ from ‘Lakshya’ and ‘Tera hi jalwa’ from ‘Wanted’ in his hometown. 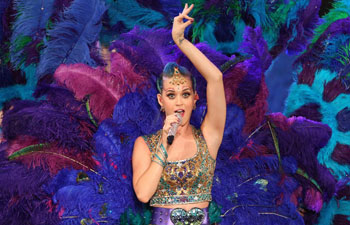 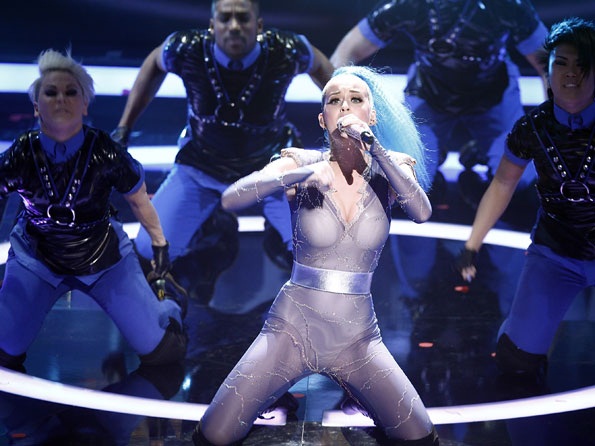 It was Salman`s ‘Dhinka chika’ performance, which was truly desi. Dressed in red pants, Salman made a dramatic entry atop a truck with dancers, and his own cutout highlighted with bulbs. He danced on several of his tracks like ‘Teri meri kahaani’, ‘Bodyguard’, ‘Munni badnaam’, ‘You wanna partner’, et al. Perry also adopted the colorful desi avatar for her first performance in the country, where she tied the knot with now estranged husband Russell Brand in 2010. Indian cricket board president N.Srinivasan in his speech promised to help former cricketers with the proceeds from the four play-off stage matches. 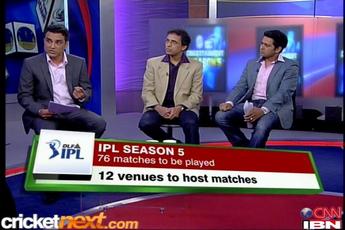 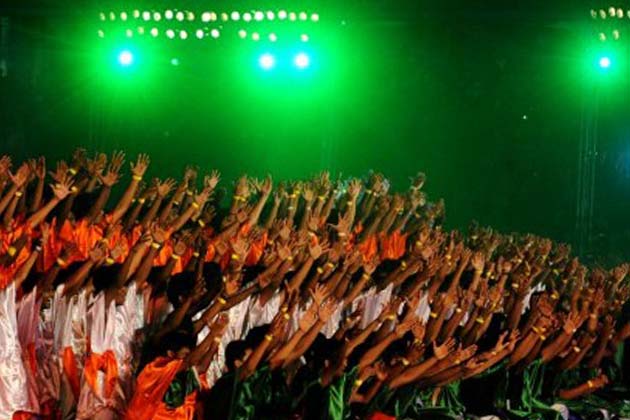 He said the Board of Control for Cricket in India (BCCI) will be distributing the proceeds among 185 international and domestic cricketers. "The proceeds from the play-off matches will be distributed among former cricketers, who have represented India at the international level and also among domestic players. The BCCI will give a one time assistance to those cricketers and around 185 Indian cricketers will benefit. It is a small gesture from the BCCI to all those who have done yeoman`s service to Indian cricket," he said.