The Concise Oxford Dictionary (2006) defines cryptography as the art of writing or solving codes. This definition may be historically accurate, but it does not capture the essence of modern cryptography. First, it focuses solely on the problem of secret communication. This is evidenced by the fact that the definition specifies “codes”, elsewhere defined as “a system of prearranged signals, especially used to ensure secrecy in transmitting messages”. Second, the definition refers to cryptography as an art form. Indeed, until the 20th century (and arguably until late in that century), cryptography was an art.

Constructing good codes, or breaking existing ones, relied on creativity and personal skill. There was very little theory that could be relied upon and there was not even a well-defined notion of what constitutes a good code. In the late 20th century, this picture of cryptography radically changed. A rich theory emerged, enabling the rigorous study of cryptography as a sci- ence. Furthermore, the field of cryptography now encompasses much more than secret communication. For example, it deals with the problems of mes- sage authentication, digital signatures, protocols for exchanging secret keys, authentication protocols, electronic auctions and elections, digital cash and more.

Users (often unknowingly) rely on cryptography every time they access a secured website. Cryptographic methods are used to enforce access control in multi user operating systems, and to prevent thieves from extracting trade secrets from stolen laptops. Software protection methods employ encryption, authentication, and other tools to prevent copying. The list goes on and on. In short, cryptography has gone from an art form that dealt with secret communication for the military to a science that helps to secure systems for ordinary people all across the globe. This also means that cryptography is becoming a more and more central topic within computer science.
Posted by Devharsh Trivedi at 8/31/2013 09:47:00 PM 1 comment: 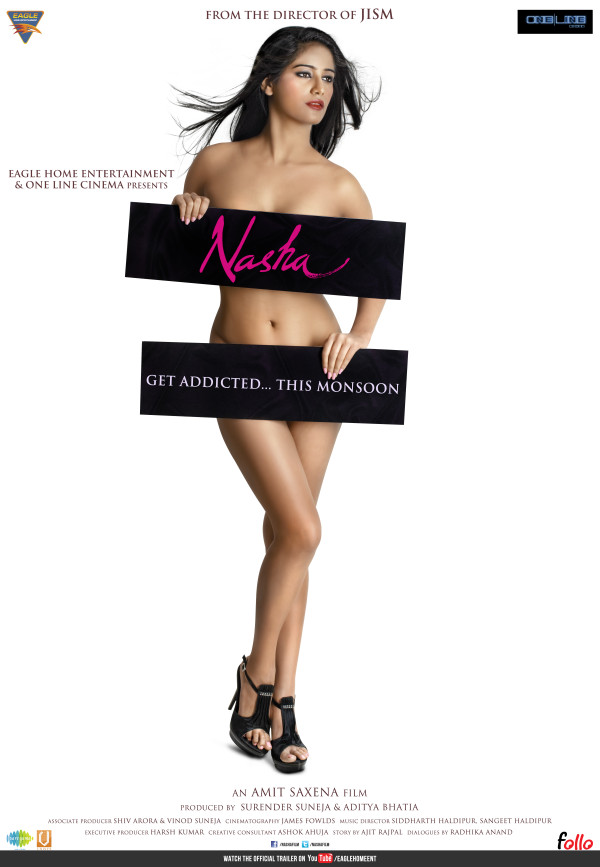 Email ThisBlogThis!Share to TwitterShare to FacebookShare to Pinterest
Labels: BOLLYWOOD 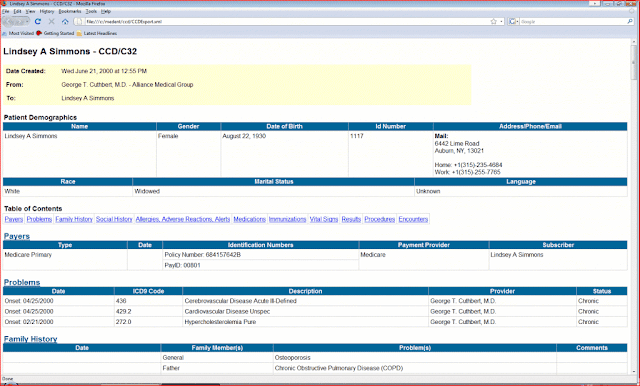 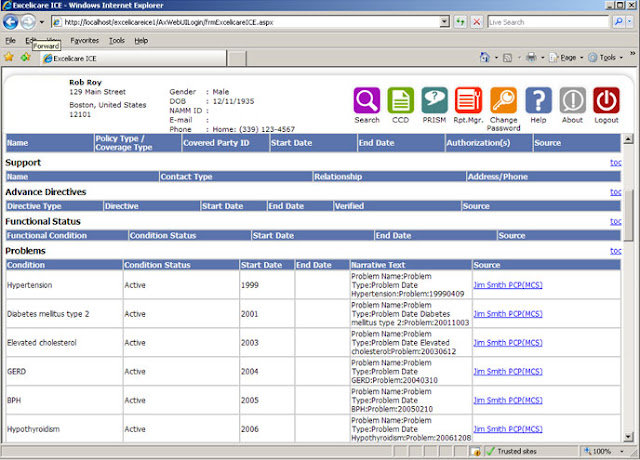 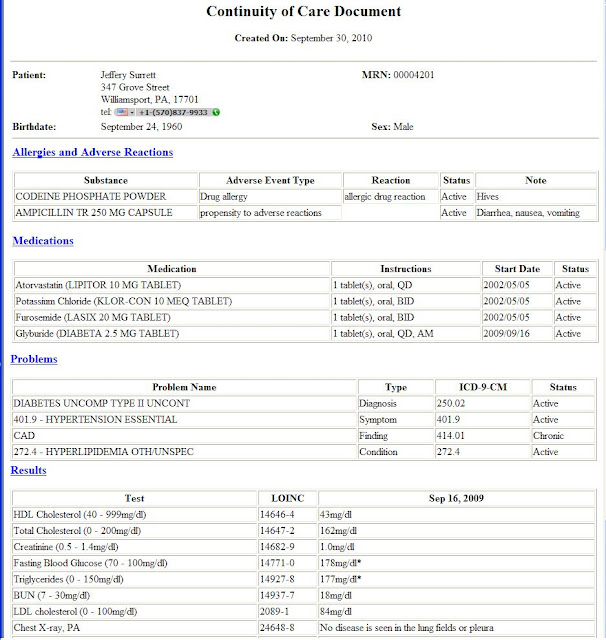 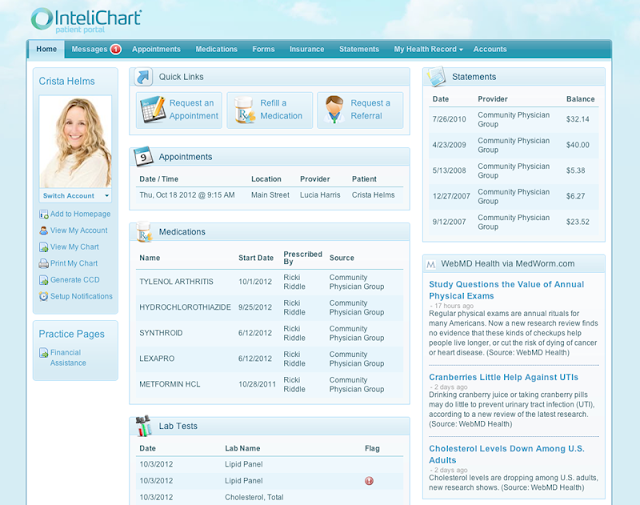 Continuity of Care Document (CCD) describes constraints on the HL7 Clinical Document Architecture, Release 2 (CDA) specification in accordance with requirements set forward in ASTM E2369-05 Standard Specification for Continuity of Care Record (CCR). It is intended as an alternate implementation to the one specified in ASTM ADJE2369 for those institutions or organizations committed to implementation of the HL7 Clinical Document Architecture. The Continuity of Care Record (CCR) is a core data set of the most relevant administrative, demographic, and clinical information facts about a patient’s healthcare, covering one or more healthcare encounters.2 It provides a means for one healthcare practitioner, system, or setting to aggregate all of the pertinent data about a patient and forward it to another practitioner, system, or setting to support the continuity of care. CCD is just one type of CDA document. Other types of CDA documents can contain some of the same CCD sections, but different sections as well.
Posted by Devharsh Trivedi at 8/31/2013 09:29:00 PM No comments: 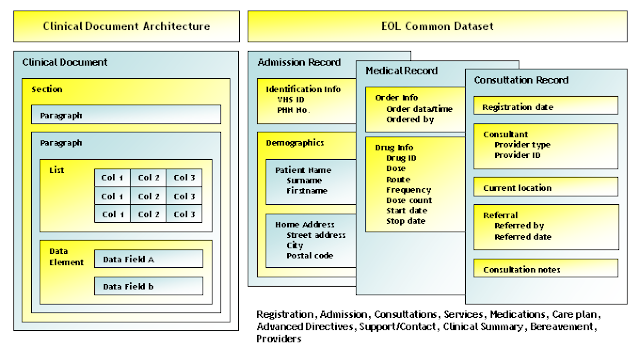 Clinical Document Architecture (CDA) is an HL7 document markup standard that specifies the structure and semantics of "clinical documents" for the purpose of exchange. CDA documents derive their machine processable meaning from the HL7 Reference Information Model (RIM) and use the HL7 Version 3 Data Types. CDA is a flexible XML-based clinical document architecture. CDA itself is not a specific document, but can be used to express many types of documents. A CDA document can contain many data sections, all of which contain narrative text, and some of which contain structured data elements, some of which are coded. There are many types of CDA documents, including CCD, XDS-MS Discharge Summary (HITSP C48), History and Physical (HITSP C84), Lab Report (HITSP C37), etc.
Posted by Devharsh Trivedi at 8/31/2013 09:22:00 PM No comments: 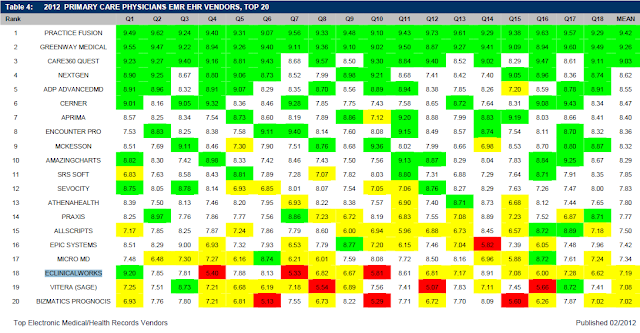 HL7 messages are in human-readable (ASCII) format, though they may require some effort to interpret.

Each HL7 message consists of one or more segments. A carriage return character (\r, which is 0D in hexadecimal) separates one segment from another. Each segment is displayed on a different line of text. (as seen in the sample HL7 message below)

Each HL7 segment consists of one or more composites (also known as fields). A pipe (|) character is used to separate one composite from another.

If a composite contains other composites, these sub-composites (or sub-fields) are normally separated by ^ characters.