Interlaced scan: Traditional TV systems (such as NTSC, the standard TV system in the United States) use an interlaced scan, where half the picture appears on the screen at a time. The other half of the picture follows an instant later (1/60th of a second, to be precise). The interlaced system relies on the fact that your eyes can’t detect this procedure in action — at least not explicitly.

Progressive scan: In a progressive-scan system, the entire picture is painted at once, which greatly reduces the flickering that people notice when watching TV. Progressive scan is available throughout a range of TV types.

1080i:
1080i video is "interlaced." 1080i video plays back at 60 frames per second, but that's a bit deceptive, because it's actually broadcast at 30 frames per second. The TV then displays those frames twice, in a way—the first pass is 1,920-by-540 for the even scan line field, and the second pass is 1,920-by-540 for the odd scan line field. The process by which this occurs is called interlacing. It contributes to a sense of motion and reduces perceived flicker. In 1080i each frame of video is sent or displayed in alternative fields. The fields in 1080i are composed of 540 rows of pixels or lines of pixels running from the top to the bottom of the screen, with the odd fields displayed first and the even fields displayed second. Together, both fields create a full frame, made up of all 1,080 pixel rows or lines, every 30th of a second.

1080p:
1080p video is called "progressive scan." In this format, 1,920-by-1,080-pixel high-definition movies are progressively drawn line after line, so they're not interlaced. On paper, that may not seem like a huge deal. But in the real world, what you end up seeing looks sharper and more defined than 1080i, particularly during scenes with a lot of fast motion. In 1080p, each frame of video is sent or displayed progressively. This means that both the odd and even fields (all 1,080 pixel rows or pixel lines) that make up the full frame are displayed together. This results in a smoother looking image, with less motion artifacts and jagged edges. 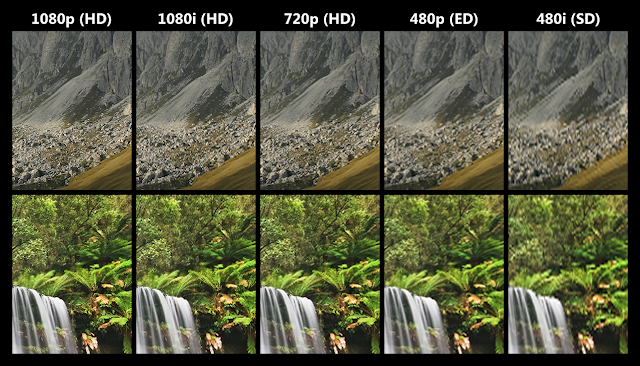 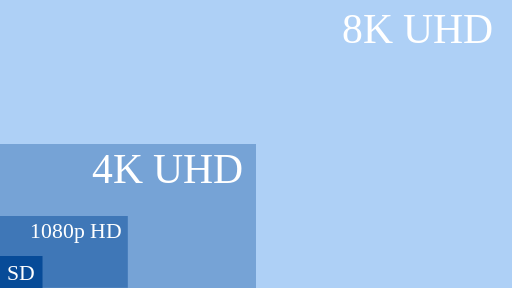 720 (aka HD) is a format with 720 horizontal lines and an aspect ratio (AR) of 16:9 (1.78:1). The number 720 stands for the 720 horizontal scan lines of image display resolution (also known as 720 pixels of vertical resolution). When broadcast at 60 frames per second, 720p features the highest temporal (motion) resolution possible under the ATSC and DVB standards. The term assumes a widescreen aspect ratio of 16:9, thus implying a resolution of 1280 px × 720 px (0.9 megapixels). 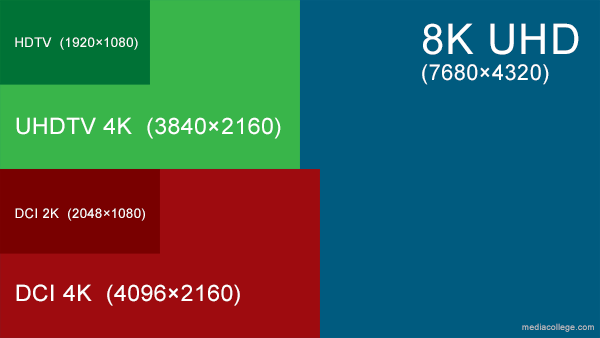 1080p (aka Full HD/ FHD and BT.709) is a set of HDTV high-definition video modes characterized by 1080 horizontal lines of vertical resolution and progressive scan, as opposed to interlaced, as is the case with the 1080i display standard. The term usually assumes a widescreen aspect ratio of 16:9, implying a resolution of 1920x1080 (2.1 megapixel) often marketed as Full HD. The choice of 1080 lines originates with Charles Poynton, who in the early 1990s pushed for "square pixels" to be used in HD video formats. 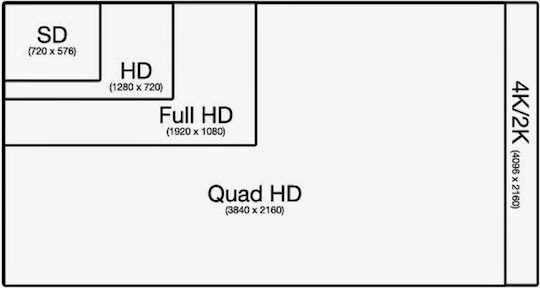 Ultra high definition television (also known as Ultra HD television or UHDTV or UHD) includes 4K UHD (2160p) and 8K UHD (4320p), which are two digital video formats proposed by NHK Science & Technology Research Laboratories and defined and approved by the International Telecommunication Union (ITU). The Consumer Electronics Association announced on October 17, 2012, that "Ultra High-Definition", or "Ultra HD", would be used for displays that have an aspect ratio of at least 16:9 and at least one digital input capable of carrying and presenting native video at a minimum resolution of 3,840x2,160 pixels.